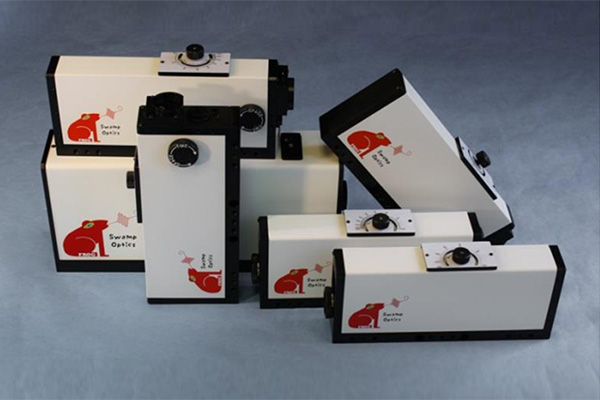 Frequency-Resolved Optical Gating (FROG) is the gold standard of laser pulse measurement.  Far more powerful than autocorrelation, it yields (among other things) the complete intensity and phase vs. time for an arbitrary pulse without the need for any assumptions about the pulse.  It is tried and true, having been subjected to every challenge imaginable and having performed very well in all cases.  FROG is used in over 1000 labs worldwide.

With recent revelations about incorrect measurements of unstable pulse trains by other techniques, FROG, which indicates instability, is an even more important device.  And, in particular, single-shot versions of FROG are playing an even more important role in ultrafast optics. Fortunately, all Swamp Optics' FROGs are single shot.

GRENOUILLE is a simple, elegant version of FROG.  It's naturally single-shot and also in use in over 1000 laser labs around the world.  It is arguably the most popular modern pulse-measurement technique.

FROG's and GRENOUILLE's popularity stems from their accuracy, ease of use, robustness, compactness, low-cost, and, most importantly, their power:  they measure more about an ultrashort laser pulse than any other method ever invented. 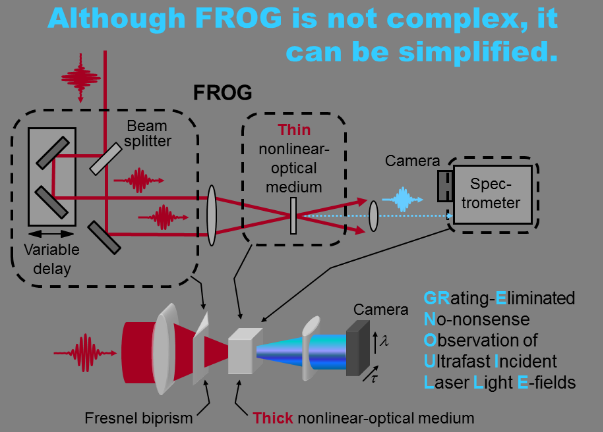 GRENOUILLE replaces the usual complex beam-splitter/delay-line/beam-recombining optical set up with one simple (patented) optical element, called a Fresnel biprism, which automatically aligns the beams. It then uses a thick nonlinear-optical crystal, which, not only performs the required autocorrelation, but it also spectrally resolves the second-harmonic pulse, as required for a FROG.  This remarkably simple arrangement also measures the spatio-temporal distortions in the pulse.  See the pulse-measurement overview or the GRENOUILLE tutorial for more details, but the result is the simplest and most powerful pulse-measurement device ever invented.

A unique feature of all Swamp Optics' FROGs and GRENOUILLEs is the inclusion of an additional camera to measure the beam spatial profile.  This not only provides this important additional information in one device, but it also vastly simplifies the alignment of your beam into the device.

Swamp Optics' FROGs and GRENOUILLEs tell you more about your pulse with less effort than ever thought possible. And they can measure pulses from a wide variety of sources, from the lowest-energy oscillator to the highest-intensity amplifier.

Why would you want all this information?  Well, most ultrafast lasers misalign over time and actually emit unnecessarily long pulses. With all this information, you can determine precisely how to realign the laser and shorten yours. Even if you're only interested in the intensity autocorrelation at the moment, our FROGs and GRENOUILLEs provide it for less than the cost of most autocorrelators, and the rest of the information will certainly be useful someday. For example, measuring the beam spatial profile means that you won't have to buy a spatial profilometer, which can cost several thousand US dollars.

Several off-the-shelf FROGs and GRENOUILLEs are available, for pulses from ~10 femtoseconds to several picoseconds. Including our Kit and Design models, these devices cover from ~4fs to ~4ns. 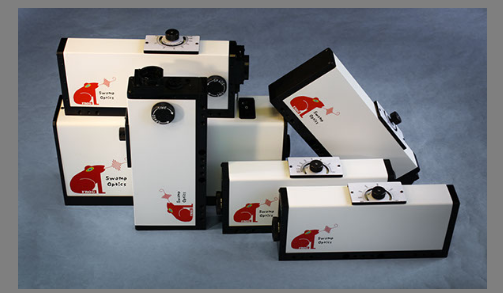 GRENOUILLE is also extremely compact and more sensitive than other pulse diagnostics, including even those that don't yield the full intensity and phase. Our near-IR GRENOUILLEs' operating range (~700 to 1100 nm) nicely matches that of most ultrafast Ti:Sapphire lasers and amplifiers, so it should be ideal for most everyday diagnostics as well as many more exotic ones. Additional GRENOUILLEs operate at telecom wavelengths and allow fiber-coupling, simplifying it use even further.  In general, standard GRENOUILLE devices can measure pulses from about 20fs to 1ps.  Additional variations on these devices can measure pulse lengths from ~4fs to ~4ns. 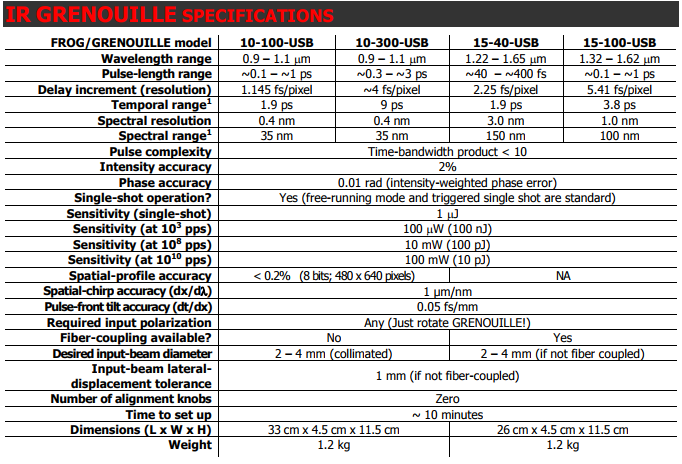 Return
Please Feel free to give your inquiry in the form below.We will reply you in 24 hours.